The best director in the world has done it again: this is one of the best films of 2021 - Walla! culture

Two films that the entire film world will talk about this year, an unnecessary docu-occupation and also one of the best sex scenes in the history of Israeli industry: Summary of the Berlin Film Festival, which took place this week virtually and despite the circumstances, managed to arouse interest

The best director in the world has done it again: it's one of the best films of 2021

Two films that the entire film world will talk about this year, an unnecessary docu-occupation and also one of the best sex scenes in the history of Israeli industry: Summary of the Berlin Film Festival, which took place this week virtually and despite the circumstances, managed to arouse interest

Trailer for the movie "Someone Will Love Someone" (Berlin Film Festival)

A little over a year ago, the 2020 edition of the Berlin Film Festival ended.

This was a moment before the corona eruption.

The Israelis who returned from it were sent for retroactive isolation, and the entire film world changed.

By the way, the winning film, the Iranian "There Is No Evil", has not yet been released.

This year, of course, the festival took place virtually and in a limited edition of only five days - from Monday to today.

For me, as has been proven to me in some previous cases, streaming is a shocking way to experience a festival, and if someone thinks it's progress and that's how things should look from now on, then have it for health.

And let's move on to the half-full glass: at least, even in the problematic conditions, the festival has managed to present world premieres of some very significant films.

The best of them was "Petite Maman" ("Little Mom") by French director Celine Siama, who in recent years thanks to films such as "A Bunch of Girls" and "Portrait of a Girl on Fire" has established her status as one of the best filmmakers working today.

The film promised a lot - and it exists.

It is a compact and compact seventy-minute drama, shot last fall, during the outbreak of the plague in France - but since it has almost no characters, and its venues are limited, it was not a problem.

The film will surely come to us in the coming months when possible.

In the meantime, to imagine what he looks like, try to think what it would have looked like if the French filmmaker had directed "My Neighbor Totoro," or another Miyazaki animated fantasy, and she does so, of course, in her own way.

The protagonist of "Little Mother" is a little girl who miraculously inexplicably gets to meet her estranged mother in another version - as a child her age, full of joy of life, and they both get to spend time together for a short time, and forge magical friendships between them.

Thus, the daughter discovers what kind of girl her mother was, before life came, and perhaps even realizes for the first time that her grief, which has always stood between the two, is not her fault, but for entirely different reasons.

Siama is doing well here with its longtime partners - photographer Claire Mathon and composer Farah Wen, both of whom are truly the best in their field.

At the same time, she also brings to the screen two discoveries - the twin Josephine and Gabriel Sanz, elementary school students who play the mother and daughter here, and do so in a way that is worthy of any superlative.

There is no increase.

The film lasts only seventy minutes, but there is so much in it.

It's a film about motherhood, childhood, innocence and sadness, about what was and what could still be, and above all - it's a song of praise.

A song of praise for an endless childhood;

A hymn to the power of play, imagination and ingenuity;

And especially a song of praise for the power of brotherhood and friendship.

"Secrets are not necessarily things we hide. They are sometimes things we have no one to tell," says one of the characters here in one of the climactic moments, and "Little Mom" ​​describes the wonderful moment when you connect with someone you can tell everything.

I wish the cinema would get back to us soon, also so that we could see "Little Mom" ​​properly - and in the meantime, one can enjoy all of Siama's previous films in yes's vod.

"Little Mom" ​​short as expected and appropriately acclaimed from the international media, purchased for distribution in the United States and will undoubtedly be one of the most talked about artistic films of the coming year.

Another hit that has become the talk of the day at the festival is "Mr Bachmann and His Class".

Unlike Siamese Pearl, this is not a short film at all - it lasts almost four hours, but the experience is worth the investment.

The film, as its name implies, follows a veteran teacher working in an industrial German city, where many of the residents are immigrants.

Despite cultural and language gaps, he manages to forge deep human bonds with his students, and the docu describes this in a compassionate and inspiring way.

I have no doubt that many teachers in Israel will be happy to watch this beautiful documentary, and may use it to better deal with their classrooms.

Almost four hours, but worth seeing.

From "Mr Bachmann and His Class" (Photo: Berlin Festival)

And if it is already Israel, it is impossible without the local code.

Two country-made films made their world premiere at the festival.

The plot is "Someone will love someone" by Hadas Ben Aroya, who broke out a few years ago with "People Who Are Not Me".

Like her previous film, and in an unusual way relative to contemporary Israeli cinema, the film takes place in Tel Aviv.

Perhaps as a result, it has scenes of doing drugs in the bathroom and also a rather graphic sex scene, but not provocative at all - the local industry has always had a hard time describing such positions, but Ben Aroya knows how to describe them reliably and subtly.

The film is made up of three episodes, most of the time centered on the character of a tangled dogwoman played by Elisheva Weil, who will soon play Shira Geffen in a series about her brother Aviv on HOT, and already here seems like a big promise.

Her performance is expressive, balanced and touching.

She does not have a single fake character, and on the other hand she manages to take a character that might have been unbearable, and make her sympathetic.

It is a film that at first seems to pretend to speak in the voice of a generation, but then becomes a portrait of one character, which could have existed in any character at any time;

It is also a film that at first, given the party scene that sets it off, seems to be an ensemble drama, but then Meidan Arma's camera chooses to focus on one character, who is one of the most complex and interesting female characters that Israeli cinema has ever presented to us.

As in her previous film, this time too Ben Aroya eludes any political or social context.

A decision that can be disputed, and to me symbolizes the cowardice of our generation.

Second note: The film is called Quote from a song by Leah Goldberg, who stars in one of the most melancholic moments in the film.

I understand and know what hurt the poetess, but what is so bad about the beautiful young people, the privileges and yet the mourners who star here?

Tel Aviv of before the Corona.

From "Someone will love someone" (Photo: Meidan Arma)

The film, by definition, seeks to present the history of the Israeli occupation apparatus, and has nothing new or interesting in it - neither historical nor cinematic.

It is made up entirely of monotonous testimonies of those who were soldiers, and joins the shooting and crying tradition of the local culture.

The video quality footage is shocking, and most of the witnesses come from the same social circle, and even the background behind them is similar.

A more appropriate name for the film was "Florentine House Party."

I will not miss the list of less successful films screened at the festival, and some have become so due to the viewing conditions, but here are some worthy names, which also received good responses and will surely travel around the world in the coming year: "Natural Light" In the best tradition of Eastern European cinema, and it will surely be a pleasure to see it on a big screen;

"Drift Away", a topical and relevant French drama about police violence and the plight of farmers in the country;

And "The World After Us," a lovable French comedy about the young and personal pains of a young writer.

Yes, there are things that do not change: before and after the Corona, no film festival would be complete without a chatty French film about a romantic intellectual.

The best director in the world has done it again: this is one of the best films of 2021 - Walla! culture

"I wanted to tell the story of young women. Unfortunately, even in 2021 it was perceived as a radical act" - Walla! culture

Returning to the big screen: A film festival in the Arava will include drive-in screenings - Walla! culture

The must-see movies before traveling to visit Japan - Walla! Tourism

Shira Haas nominated for a Golden Globe for "The Rebel": 2021 Nominations - Walla! culture

Sean Connery, one of the greatest movie stars of all time, has passed away at the age of 90 - Walla! culture 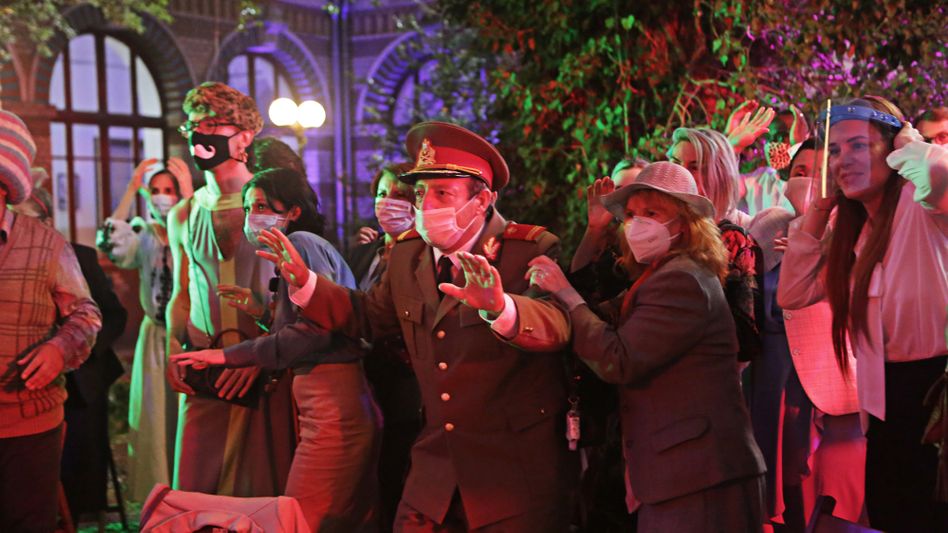