Representatives of teachers and students want nationwide requirements for school openings, such as compulsory testing. And: Argentina is again imposing curfews. The overview. 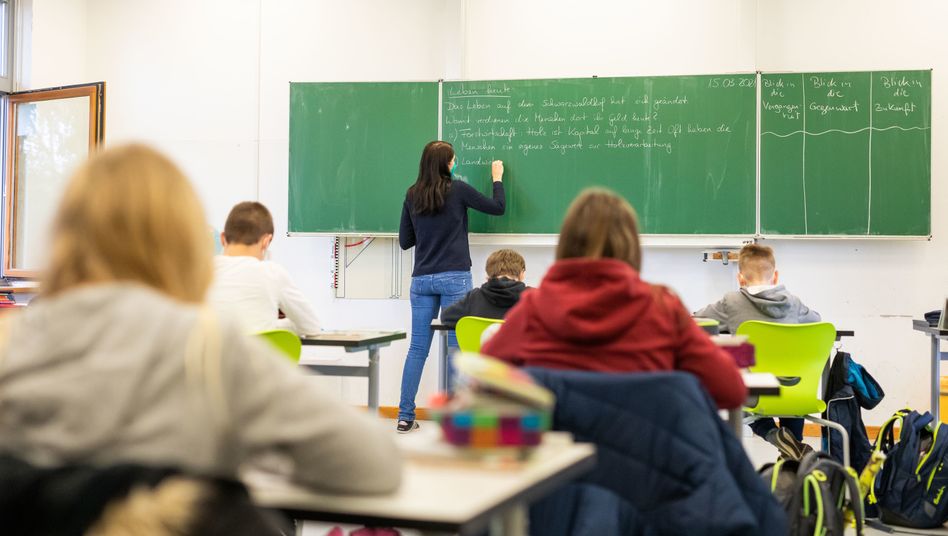 In view of the second wave of the corona pandemic in Argentina, the country's government is again imposing strict exit restrictions.

In the districts particularly affected, a night curfew between midnight and 6 a.m. will apply from Friday, as announced by President Alberto Fernández.

"Argentina caught the second wave," said the head of state.

"As president, it is my responsibility to take the reins in hand and lead the country." Fernández had recently infected himself with the coronavirus despite a vaccination.

Private gatherings in houses and apartments beyond one's own family are prohibited until the end of April, meetings in the open air are limited to a maximum of 20 people.

Restaurants and bars have to close at 11 p.m., casinos and discos will be closed completely.

Local public transport is only allowed to be used by employees from essential sectors.

These restrictions apply to residents of the capital Buenos Aires and the surrounding suburbs as well as the metropolitan areas of Cordoba, Mendoza, Tucumán, San Juan and Rosario.

A total of about 26 of the 45 million Argentines are affected.

In the other regions, the governors should make arrangements to reduce mobility and contacts.

On Wednesday, Argentina reported 22,039 new infections within 24 hours - more than ever before in the pandemic.

In total, around 2.4 million people in the South American country have been shown to have been infected with the coronavirus, and almost 57,000 patients have so far died in connection with Covid-19.

The chairman of the World Medical Association, Frank Ulrich Montgomery, welcomes the decision of the EU authority EMA on the AstraZeneca vaccine and calls for a choice of vaccines.

“The discussion about the AstraZeneca vaccine continues.

So it is good that the EMA shows a clear edge, «said Montgomery of the newspaper» Rheinische Post «.

Although there is still no scientific evidence, the vaccine is in all probability responsible for the very rare cerebral vein thromboses, especially in women under 60 years of age.

From a European point of view, Biontech, Moderna and Johnson & Johnson should be relied on even more to prevent irritation among the population.

"And you have to give people the right to vote for the vaccine as soon as possible."

Dehoga calls for an opening perspective for May

The hospitality industry association Dehoga is pushing for an opening

“On April 12, the necessary measures must be taken to enable the hotels and restaurants to open during May.

It will definitely not go on like this, ”says Dehoga general manager Ingrid Hartges of the newspaper“ Rheinische Post ”with a view to the economic summit of Minister Peter Altmaier (CDU).

A nationwide binding catalog of measures is needed, which clearly regulates which restrictions or easing occurs when certain values ​​are reached.

In order to create more incentives for tests in companies, employees with negative test results should receive certificates.

If the employee with the negative test from the company can then go to the shops or outdoor catering after the end of work, this certainly increases the willingness to take the voluntary tests in the company.

The virologist Hendrik Streeck was surprised at the recommendation to offer people a second vaccination with Biontech or Moderna active ingredients after a corona vaccination with the preparation from AstraZeneca.

“The clinical studies haven't started yet.

I think it is necessary to stick to the rules and wait to see whether the studies are successful, ”said Streeck of the“ Fuldaer Zeitung ”.

But he thinks it is a "understandable" decision not to give the AstraZeneca vaccine to people under the age of 60 - even if the vaccine itself is good and safe.

The Standing Vaccination Commission (Stiko) had recommended that people under the age of 60 who have already received a first corona vaccination with the AstraZeneca preparation should switch to another agent when they have the second vaccination.

The reason for this are several suspected cases of cerebral vein thrombosis.

The Stiko recommended that an mRNA vaccine be given as a second dose.

The mRNA vaccines from Biontech / Pfizer and Moderna are approved in Germany.

The chairman of the Stiko, Thomas Mertens, told the "Rheinische Post" about the recommendation for a second vaccination: "The protection against Covid-19 decreases after a certain time with a single AstraZeneca vaccination." Mertens said that it would be with a second vaccination with another Vaccine could even have a better protective effect.

The EU Medicines Agency EMA unreservedly recommended the use of AstraZeneca on Wednesday.

The Amsterdam-based authority explained that the benefits should be rated higher than the risks.

The British Vaccination Commission, however, changed its recommendation: In future, the AstraZeneca preparation should only be given to people over 30 if possible.

for general relief for people with corona vaccination, the German Foundation for Patient

"So far, the federal and state governments have not bindingly stipulated the conditions under which inpatient care and fully vaccinated people in need of care get their basic rights back," said the foundation's board of directors, Eugen Brysch, of the dpa.

The federal and state health ministers discussed on Wednesday that for people with full corona vaccination protection, obligations for corona tests should probably be waived in the future.

People with complete vaccination protection could be treated like people who had a negative test result on a daily basis, according to one of the dpa recommendations from the Federal Ministry of Health.

According to Brysch, he doubts that the course taken by the health ministers will also bring more freedom to the 900,000 nursing home residents.

"Even if 75 percent of the people in the facilities have received a second vaccination, curfews, contact restrictions and quarantine requirements remain determining in everyday life," he said.

"A cup of coffee in the outdoor restaurant, spontaneous meetings with vaccinated or tested relatives, even attending church services remain taboo for vaccinated residents."

Those affected will only have the option of enforcing their fundamental rights in courts.

"All hopes are on the Federal Constitutional Court," said Brysch.

"There is a lawsuit pending here from vaccinated seniors who want to finally meet again in the cafeteria."

The recommendations of the Federal Ministry of Health expressly provide for a more cautious approach in nursing homes "in order to minimize the residual risk of infections being passed on in these sensitive areas."

Shortly before the next federal-state meeting on Monday, the FDP is calling for a new procedure to combat pandemics.

"The chancellor's round with the prime minister no longer works," said FDP general secretary Volker Wissing to the newspapers of the Funke media group.

It is irresponsible to adopt far-reaching restrictions on freedom without the full involvement of parliaments.

A procedure is needed that ensures the involvement of the German Bundestag.

Number of new corona infections in Turkey at a high

In Turkey, the number of new coronavirus infections has risen to the highest level since the beginning of the pandemic.

On Wednesday, 54,740 new cases of infection were recorded within 24 hours, according to data released by the government.

A further 276 deaths were counted.

The total number of corona deaths in the country since the beginning of the pandemic grew to 32,943.

Most recently, the government of President Recep Tayyip Erdoğan tightened the corona restrictions that were loosened at the beginning of March due to the increasing number of infections.

In the cities most affected - including the capital Ankara and the metropolis of Istanbul - curfews were imposed on the weekends.

Erdoğan also announced restrictions on public life during the entire Muslim fasting month of Ramadan, which runs from mid-April to mid-May.

In addition to lockdowns on the weekends, this also includes the extensive closure of restaurants.

These may only remain open for the delivery and collection of food.

Erdoğan expressed the hope that the restrictions could reduce the number of infections in time for the start of the holiday season in May.

The corona vaccination campaign began in Turkey in mid-January.

The country initially relied almost exclusively on the preparation of the Chinese company Sinovac.

Since last Friday, however, the vaccine from the Mainz company Biontech and its US partner Pfizer has also been administered.

Is there a part of our body that is resistant to corona? - Walla! health