Corona news on Tuesday: The most important developments on Sars-Cov

In Germany, according to the RKI, 294 people died within 24 hours in connection with the corona virus. Intensive care physicians expect more than 6000 patients in April. The overview. 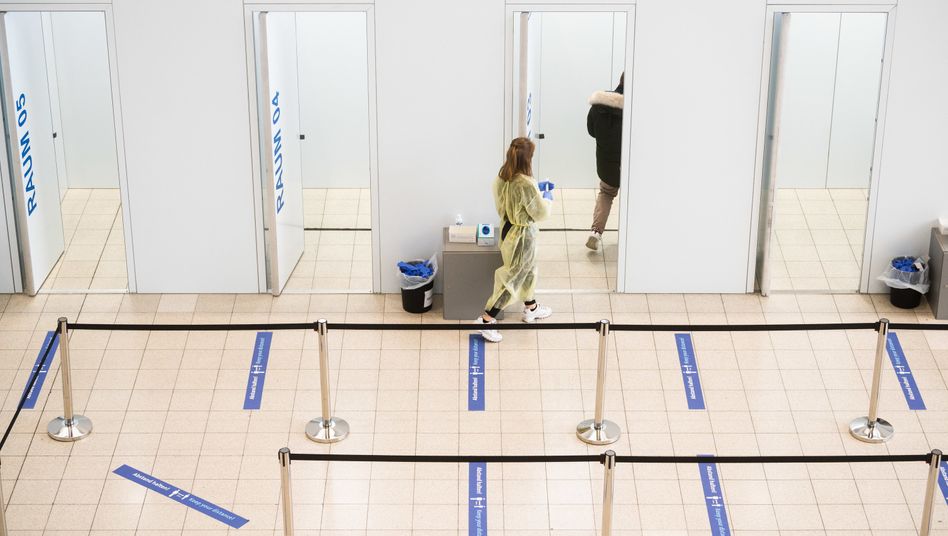 Corona variants, against which current vaccines are less effective or no longer effective, can also arise in Germany, according to researchers.

This is particularly possible if the virus is now spreading strongly in the third wave, said Stefan Pöhlmann and Markus Hoffmann from the Leibniz Institute for Primate Research in Göttingen.

According to the information, such escape variants can arise if the virus spreads in a population with incomplete immune protection.

This is also the case, for example, if the immunity slowly decreases after surviving an infection or vaccination.

In a population with a certain degree of immunity, escape variants with comparable infectivity would have an advantage over the original virus, according to Pöhlmann and Hoffmann.

In such a scenario, an escape variant would become dominant relatively quickly.

An example could be the mutant P.1 in Brazil.

"If there is hardly any immunity in a population, as is currently the case in Germany, an escape variant would be in direct competition with the predominant virus variants, which for their part still find enough susceptible hosts," said the scientists.

Then an escape variant would only prevail over a large area if it was also easier to transfer.

The experts from the German Primate Center, together with colleagues from the Ulm University Hospital, discovered that an antibody used for Covid-19 therapy was completely ineffective in variants B.1.351 (from South Africa) and P.1.

You therefore classify the two as escape variants.

It can be assumed, however, that B.1.351 and P.1 would still be inhibited by the available vaccines.

"However, vaccination protection may be reduced and of shorter duration." It is therefore all the more important to quickly achieve large-scale immunity in the population through vaccination and thus deprive the host variants that they needed to spread.

In order to improve the protection against variants such as B.1.351 and P.1, the existing vaccines could be adapted.

"This procedure would be similar to the vaccination strategy with which we protect ourselves against flu viruses," said Pöhlmann and Hoffmann.

The emergence of variants that are no longer inhibited by the vaccines that are now available is "an extreme scenario, but cannot be ruled out."

In order to reduce the likelihood that escape variants will arise, the spread of the virus must be effectively contained - for example by complying with the AHA rules and vaccination across the board.

In view of the increasing corona numbers, the intensive care medicine association Divi expects that the previous high level of intensive care patients will be reached faster than expected - namely in April.

"We have to assume that we now have to admit between 50 and 100 new Covid intensive care patients every day across Germany," said the President of the German Interdisciplinary Association for Intensive and Emergency Medicine, Gernot Marx, of the "Augsburger Allgemeine".

Corona patient in an intensive care unit in Berlin

Marx called on the federal government, the Bundestag and the federal states to adopt the planned federal regulations for regions with a seven-day incidence of over 100 new infections per 100,000 inhabitants this week.

If the law is not passed until the end of April, the number of patients will rise to 7,000.

The business associations continue to oppose the planned corona test obligation for companies.

"Once again politicians are trying to shift their duties on to employers, not to mention the costs," said the President of the Federal Association of Wholesale, Foreign Trade, Services (BGA), Anton Börner, to the newspapers of the Funke media group (Tuesday edition).

Nine out of ten companies would already test their employees for the corona virus or will do so shortly.

As a matter of principle, Börner only advocates event-related tests: "Fixed test intervals are unsuitable."

The trade also clearly opposed such a test obligation for companies.

"We still consider a statutory test obligation for our craft businesses neither necessary nor expedient," said the President of the Central Association of German Crafts (ZDH), Hans Peter Wollseifer, of the Düsseldorf "Rheinische Post".

He also criticized that the state wanted to "shift responsibility for fighting the pandemic to the economy."

Most companies are volunteering to test their employees or are preparing to do so immediately.

An obligation to test is "a legally unnecessary action".

According to the SPD, the federal cabinet wants to pass a regulation on Tuesday that obliges employers to offer a quick test for face-to-face employees.

According to the "Handelsblatt", it is planned that employers will in future offer their employees a corona test at least once a week, provided they do not work exclusively in their home.

Employees housed in shared accommodation or employees who have direct physical contact with other people or frequent customer contact must therefore be offered two tests per week.

The regulation does not provide for an obligation to provide evidence of the test performed.

Self-tests could also be used.

Corona variant B.1.1.7, which was initially discovered in Great Britain, is, according to current studies, more contagious than the original form, but not more deadly.

This is the conclusion of researchers in two separate studies that were published on Tuesday in the journals "The Lancet Infectious Diseases" and "The Lancet Public Health".

Previously, there had been some assumption that variant B.1.1.7 was not only easier to transmit than the wild form of the virus discovered in Wuhan, but could also lead to higher patient mortality.

In their study, researchers from University College London used PCR tests to examine the viral load of infected people and to evaluate the severe courses and deaths that occurred during this period.

However, the proportion of patients who died of Covid-19 was not increased in the variant.

The other study published in "The Lancet" evaluated symptoms of Covid patients who reported them via an app of the health system.

By means of gene sequencing, they also determined which corona variant those affected were suffering from.

This study also found no significant differences in the severity of the disease or in the demonstrable long-term effects of an infection.

However, the researchers demonstrated a significant increase in the R value for the British variant, which describes the development of the pandemic.

This also speaks in favor of an increased transferability of the variant.

However, the scientists admit that additional studies are needed to further confirm the findings.

Hundreds of people demonstrate in Rome against the closure of restaurants

In Rome, hundreds of people protested against the closure of restaurants, which had been going on for weeks, due to the corona crisis.

Police held protesters in check in a central square in the Italian capital on Monday after a march to the seat of government stopped them.

Far right supporters attended the protests, some of whom threw bottles and smoke bombs at the police.

All of Italy was in lockdown over Easter, all restaurants, bars and cafes had to close - except for take-away sales.

The now cautious openings in parts of Italy do not include the restaurants, which are expected to remain closed until the end of the month.

The protests of restaurant owners and other demonstrators in Rome now joined a series of protests against lockdown measures in Italy.

Media report: In the future, apparently neither tests nor quarantine are necessary for fully vaccinated people

According to a media report, people who have already been fully vaccinated will no longer have to go to the coronavirus test or be quarantined.

This emerges from a letter from the Federal Ministry of Health to the state chancelleries of the federal states, which "Bild" has.

The federal, state and local governments should accordingly amend their ordinances and decrees accordingly.

The prerequisite is that the vaccines from Pfizer / Biontech, Moderna, AstraZeneca and Johnson & Johnson are approved in the EU.

The federal government also recommends that the federal states lift the quarantine requirement for vaccinated contact persons of infected people.

Britain has offered vaccinations to everyone over 50

Great Britain announced on Monday that all over 50s had received a first dose of the COVID-19 vaccine.

This achieved the goal of offering vaccinations to all people in the nine groups with the highest priority by April 15.

The UK has one of the fastest vaccination campaigns in the world behind Israel based on the proportion of the population who received at least one dose of the corona vaccine.

This enabled the government to announce that it offered priority groups 1 to 9 at least one vaccination before the Thursday deadline.

This includes all adults over 50 years of age, people at risk of health and health and social workers.

"We have now reached another very important milestone in our vaccination program by offering vaccinations to all people in the nine highest risk groups," Prime Minister Boris Johnson said in a statement.

"We will now proceed to complete the necessary second doses and make progress towards our goal of offering a vaccine to all adults by the end of July."

People in their late forties are expected to be the next to be invited for vaccinations, although a final decision has not yet been made, Johnson's office said.

The success of the vaccination program has underpinned Johnson's schedule from the lockdown, which saw the reopening of all shops and outdoor dining in England on Monday.