Heat in Germany: This is how dogs, cats and the like get through the summer well

Panting dogs, lazy cats, budgies with torn bills: pets also suffer from the heat. What owners can do now. 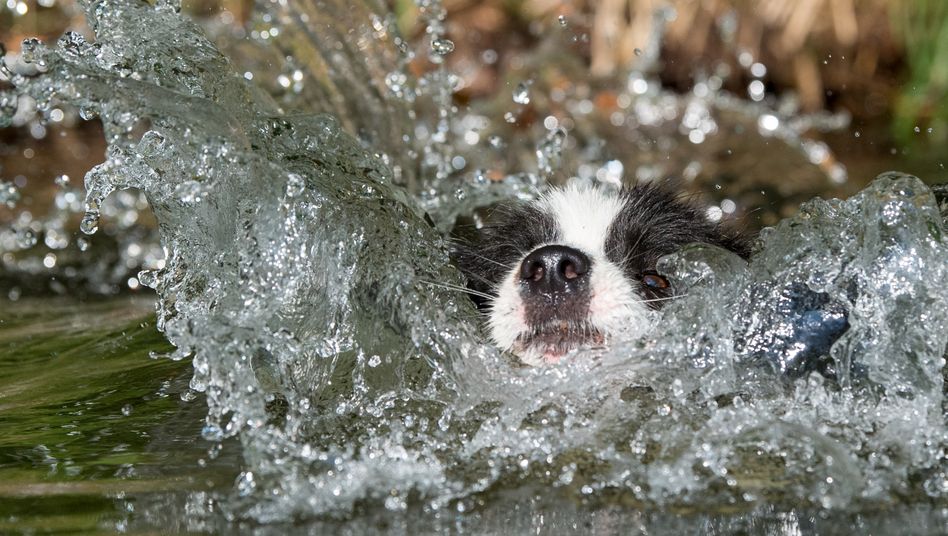 Dogs, too, long to cool down at high temperatures

The sun is shining, the temperatures are rising.

Summer can be torture for animals.

These tips can make life easier for animals.

Leave as little in the car as possible

Get something quick and leave the dog in the car?

This is not a good idea right now.

"Regardless of whether they are dogs, cats or other animals: they should all be transported in the car as little as possible at the moment," says Svenja Broocks from the animal clinic in the Alstertal.

When the car is in the sun with the windows closed, it can quickly become a death trap.

The problem: dogs cannot cool themselves down by sweating like humans.

They pant so as not to overheat.

But that is only possible to a limited extent.

If the temperatures rise to 30 degrees - whether in the car, outside or in the apartment, it becomes problematic.

Although dogs pant, their body temperature rises and this can be dangerous after just a few minutes.

In the worst case, breathing stops and the dog dies.

Before that, however, it sends warning signals (see below).

The heat can also be life-threatening for other animals, especially rabbits and guinea pigs.

on its side and is panting very quickly, that is a sign that the animal is overheating," says Broocks.

Even if the mucous membranes, for example on the eyes, turn purple, it is a sign that the animals are too hot.

In such cases, they must be cooled immediately, for example by moistening the dog with water down to the skin or by putting on leg wraps.

However, dogs should not be completely wrapped in wet towels.

tend to handle the heat better than dogs.

They usually look for shady spots on their own.

However, owners should take care of older and younger cats because they sometimes stay in the sun even though they have long since overheated.

At high temperatures, all animals need sufficient fresh drinking water, regardless of whether they are dogs, cats, guinea pigs or rabbits.

Dogs can also take a dip in the lake to cool off.

"However, you should pay attention to the quality of the water," says Broocks.

At the moment, for example, numerous swimming lakes are closed because the heat causes blue-green algae and pathogens to multiply explosively.

If people shouldn't bathe there, this usually also applies to dogs.

"An alternative to the lake can be, for example, cooling off in the paddling pool," says Broocks.

Most animals are sluggish in the heat.

This is completely normal and keepers shouldn't encourage them to move around.

"Long walks should be postponed to mornings or evenings," says Broocks.

Visits to the quarry pond can also be torture for dogs when they are supposed to lie on the blanket in the sun.

Because what people perceive as pleasant warmth is often painful heat for dogs.

If necessary, reach for the clipper

"It can be a great relief to shear the dog," says Ariane Ullrich from the professional association of dog educators.

"This is especially true for old and weakened dogs." It is better not to shear cats.

A normally developed coat not only protects them from cold, but also from heat.

The exception are long-haired cats.

They usually feel more comfortable when they have a shorter coat in summer.

Cages don't belong on the windowsill

For example, they open their beak to cool off.

In addition, they dissipate heat through parts of the body where they have no feathers.

In nature, for example, they put their legs in the water and can thus cool their body temperature.

Bird keepers can offer their animals enough fresh water in a shallow bowl.

In addition, many birds like it when you spray them with lukewarm water or put damp branches in the cage.

Cucumber slices and fresh lettuce leaves can also cool you down.

Rabbits and guinea pigs are

You definitely need shade, holders can put up parasols, for example.

"I myself bring my guinea pigs in during the day because it's a lot cooler there," says Broocks.

However, you should definitely avoid drafts, as the animals can then catch cold quickly. Fox tapeworm: How to protect yourself against the parasite

Heat in Germany: This is how dogs, cats and the like get through the summer well

Heat hazard for dogs and cats: this helps your four-legged friends Heat hazard for dogs and cats: this is how you can help your four-legged friends

Dangerous heat for dogs and cats: How to protect your four-legged friends

Heat hazard for dogs and cats: How to protect your four-legged friends

Heat hazard for dogs and cats: this offers protection for four-legged friends

Heat hazard for dogs and cats: How to protect your four-legged friends