Genesis' cars have so far been refreshing surprises and the price was the icing on the cake. The G70 in the sports version is no different, but this time the price is not the most impressive

The compact sedan is perhaps not what it used to be, but no self-respecting luxury manufacturer can give up one on offer.

This is a completely different challenge

The performance in the aggressive and combative sports version (Photo: Keinan Cohen)

Only when I sat down to write the Genesis G70 road test did I realize that we are in completely paradoxical days when it comes to a luxury sports-sedan car. On the one hand, for a long time now the customer has not been able to drive such a wide fan of very different cars in this group. From Volvo S60 to Cadillac CT4, Tesla Model 3 to Alfa Romeo Julia, Lexus to Mercedes and BMW to Audi. Not all of them are on the same level, but there is a solution for almost every taste or direction. On the other hand, the ratio of Q5, X3, XC60 or all the other equivalents in relation to these sedan cars also says something else - the offer exists, but customers flow to other places - and yet, displaying a car in this category is a convention that manufacturers simply can not afford to ignore and party Simple - this is still the category that most balancedly represents the relationship between "sport" and "elegant" and from which these manufacturers derive quite a bit of their aura and image.

When Genesis started walking this path a few years ago, it knew it and built its offering with a line of models each of which is a release of precise punch to places where its competitors are well established.

Excellent proportions, and this color, with these hoops and calipers - dressed to kill (Photo: Keinan Cohen)

Although no longer young at its core and celebrating four years, the G70 maintains a fairly up-to-date look. It packs into it the design features of the G80 saloon, grille, winged emblem, narrow lighting units, long hood and compressed rear. But apart from the very distinct and recognizable front end, it has here and there all sorts of things reminiscent of other cars, the tail in the profile is too much for the outgoing Mercedes C-Class and the rear beam completely carries BMW's "Hoffmeister Kink".

But while the exterior design has remained fresh thanks to good proportions and an update last year, the driver environment is already hard to look like the last word and these red fabric upholstery might help bounce off visibility, but really it was a little too much, how to say, extroverted. The operation is very convenient, and there is a generous multimedia screen of 10.25 inches and a digital dashboard of 12.3 inches, the operation of all the equipment is done in a direct, simple way, without all kinds of attempts at sophistication.

Age is beginning to show in the cabin (Photo: Keinan Cohen)

The tested version is the "Sport" where the emphasis is more on sporty-dynamic features and not rich equipment like the "luxury" finish level, and still with leather upholstery, electric seat and steering wheel direction, panoramic roof window, wireless charging, Lexicon audio system with 15 speakers the list goes on - try equipping it competes with European and come back with a hole of a few tens of thousands of dollars in checking accounts - and it's not money like this feeling, you go out a bit, well, what you call it, the word sounds like flyers.

even a list Accessories safety long and full Beyond all the common good, there is also an active hood that reduces pedestrian injury severity, 360-degree cameras with a three-dimensional display, displaying "dead space" in a signal on the dashboard (say again, in the eyes of a gimmick, likable, but only a gimmick) to a system Warning against forgetting children in the car.

There is a digital display, but creativity is not out of the ordinary, human engineering is simple and very good (Photo: Keinan Cohen)

The dimensional gap between it and the large and spacious seats in its competitors is not large, but in practice the 284 cm in its wheelbase does not translate into a special space in the back seat, even quite borderline and for an adult or third teenager to sit in the middle seat is recommended to give up immediately. And deep at first glance despite only 330 liters official, but a narrow opening and it does not excel in accessories except a compartment with a mesh on the side and anchor rings at its bottom.

The front seats made me sigh with pleasure every time, the rear - less, much less ... (Photo: Keinan Cohen)

The G70 is based on a common platform for it and Kia Stinger, unlike the Stinger GT that came here with the 3.3-liter V6 turbo engine with 370 hp, it comes with the 2.0-liter four-cylinder engine with 245 hp and 36 kg "M. Although we were a bunch of pampered people who turn up their noses at the sight of a number of less than 300 horses - in practice, in any driving situation and really get extreme points - these are more than enough horses to be very fast on the road. But these are not the interesting numbers, there is speed from her, but what she knows how to do on a winding road, oh-oh, we have not seen it for quite some time, and the last to raise such a smile was Alpha Julia Volocha.

The business is not impressive here, neither in volume nor in usability (Photo: Keinan Cohen)

Its chassis is superbly made, and along with its adaptive shocks it comes with a packaging that externalizes and emphasizes its rear-wheel drive chassis right at the points that make a silly smile on the face.

Exiting the back is her first choice in sharp turns, where she presses her nose into the rotation quickly.

Or just a quick turn at the intersection, especially in sports mode and certainly in the very liberal "Sport +" in the degree of grip (or non-grip) it allows.

This version also has a limited quick-slip differential response means you can step on graceful hooliganism on so many occasions.

It can also pass a lesson or two on the laws of applying adaptive shock absorbers.

The transition between the modes is very tangible in their level of damping and rigidity.

In comfort mode you can sew 200 km in a row comfortably and softly, then on reaching the winding road switch to "sport" mode, feel the side struts of the seat tighten the body hug and the four piral tires are stuck in the asphalt with the hardening of the shock absorber.

Not yet a common sight in Israel, it is also an advantage in this category (Photo: Keinan Cohen)

In order to give work on roads that are not type A-W, it is better that you stay in this condition and not go up to the "sport +" mode, which is already really hardening it, to the point of jittering on non-smooth paving.

On the other hand only in this mode the gearbox was found to be most suitable for sporty driving not in "manual" operation.

Which leads to the unit's criticism more or less of its dynamic aspect - the lack of an "individual" situation that exists in some of the competitors and allows for an individual set-up according to the preferences of each of the parameters.

At the end of the test days, another aspect of her dishwasher was also revealed that drives strong driving - very politically incorrect fuel consumption nowadays we are saturated with hybrid and plug-in and electricity - 8.4 km per liter.

So until now, all our driving in the Genesis model, from the saloon G80 to the newest GV70 has impressed us greatly with a package of dimensions, quality, instrumentation, behavior and finally also price.

On the G70 the impression is again very good, but it is not a convincing knockout compared to the rest of the manufacturer's offering.

Less convincing due to the slightly outdated feel in the cabin, due to the density of the back seat and perhaps also due to the fact that we are already used to such large price differences compared to the competition.

Here, too, even in this very expensive version and at NIS 340,000, there is one (when comparing horses and equipment) and it is to its advantage - but not in the dizzying way that it does in the other models.

On the other hand, and this is something that is difficult to price - when even in its entry-level model, the importer gives customers the Genesis Joker in Israel - the best service and treatment package and in the gap (personal service manager 24/7, free treatments for 3 years, collection, Return and a replacement vehicle for treatments and more) - this is a bonus that no one sticks their heads in, not even the competitors.

Bottom line, the G70 in this version is more of a customer question than a car.

For those whose list includes the items of driving pleasure, dynamism and instrumentation appear higher than those of rear space, image and symbol usability or fuel consumption - can see itself exempt from hesitation.

But how many are there already?

Remember the epidemic of crossovers from the opening?

Take a look around and see for yourself what the G70's challenge is.

On the technical side: Genesis G70 "Sport" 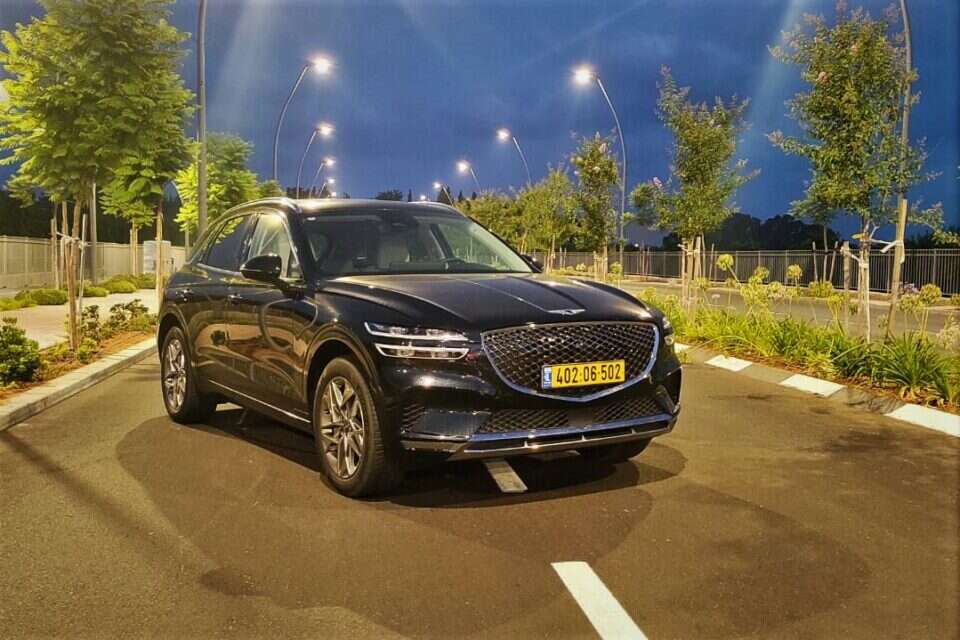