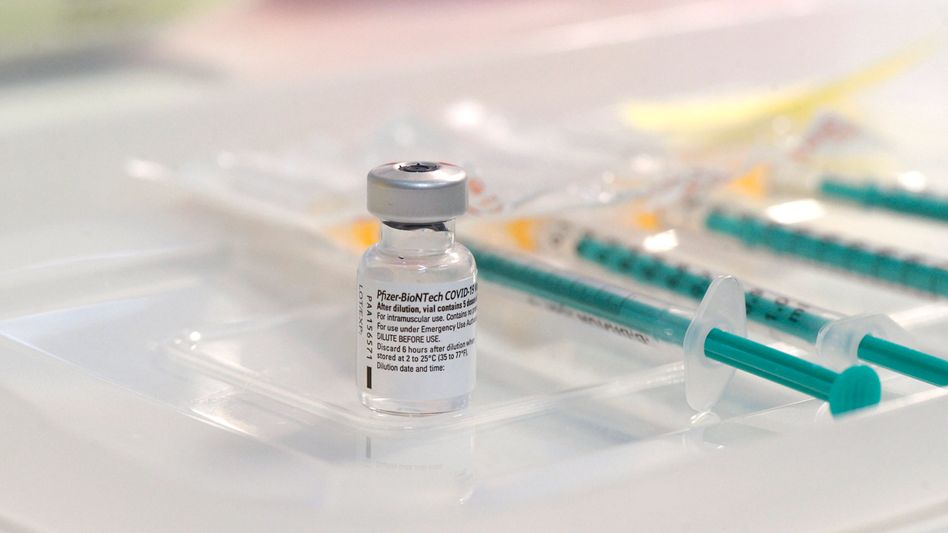 This article is continuously updated

In France, nursing staff and fire fighters are required to have a vaccination

In France, a corona vaccination is

Health workers who have not received at least a first dose of vaccine will face sanctions from Wednesday.

Those who are not fully immunized by October 15th face consequences up to and including being banned from their profession.

Tens of thousands of French took to the streets in recent weeks against the regulation.

According to surveys, however, up to three quarters of the French are in favor of compulsory vaccination for health and care workers.

In total, around 70 percent of the French population are now vaccinated.

Expert warns of a renewed increase in the number of infections

Despite a stable infection days in Germany for several days, an expert warns against jumping to conclusions.

The Saarbrücken expert for corona prognoses Thorsten Lehr does not consider the stagnation of new infections for the end of the fourth wave and a sudden increase in the corona numbers possible.

"We were able to observe this behavior of the incidence curve almost to the day last year," said Lehr of the dpa news agency.

A year ago, too, the incidence fell slightly and remained at a constant, slightly lower level than it is now, before it rose sharply again at the end of September.

"With the current vaccination situation and the relaxed contact restrictions, a similar increase can be expected at the end of September and again at the beginning of October," warned Lehr.

Lehr justified the stagnation in the number of infections with the declining number of travelers returning and the infections they brought in.

In addition, the number of infections among schoolchildren rose explosively in many federal states after the summer holidays.

Due to the continuous testing and quarantine measures with contact persons, in many places one to two weeks after starting school there is stagnation or even a decrease in the numbers in this age group.

has criticized the plans of many federal states to end wages for unvaccinated people in quarantine.

From the union's point of view, it is wrong to try to "introduce compulsory vaccinations through the back door," said union chairman Frank Werneke to the newspapers of the Funke media group.

The debate triggered by employers' associations and Federal Health Minister Jens Spahn on the cancellation of compensation was counterproductive, the union leader told the papers.

This shifts the conflicts to companies and workforces and creates uncertainty.

According to Werneke, the German trade union federation DGB and its member unions have played an active part in accelerating the vaccination rate in Germany for months.

"Employers are now called upon to emphatically advertise vaccinations and enable them during working hours," demanded Werneke.

Lambrecht calls for more help for

Federal Family Minister Christine Lambrecht has called for more help for children who are mentally stressed by the corona pandemic.

»We need better and earlier care for the children who suffer from mental illnesses.

Parents have to get a therapy place for their child faster, «said the SPD politician to the newspapers of the Funke media group.

This Wednesday, the report of a joint working group of the Federal Health Ministry and the Federal Family Ministry “Health effects on children and adolescents due to Corona” should come to the Federal Cabinet.

According to the report, this includes 26 recommendations.

This also includes the requirement to ensure sufficient psychotherapeutic care offers as well as a temporary expansion of the offer of the health insurance companies to cover the costs for the regular medical examinations of older children.

According to Lambrecht, children suffered greatly from fear, loneliness and a lack of exercise in the pandemic.

This emerges from data from the Federal Employment Agency, which is available to the editorial network in Germany.

For comparison: In February 2020 - the last month without a lockdown - there were 67,137 top-ups, according to the papers.

This corresponds to an increase of around 15 percent.

According to the data from the Federal Employment Agency, the number peaked in March 2021, the papers report: At that time, there were 80,010 self-employed who received supplementary benefits.

The numbers have been around this level since the beginning of 2021.

For example, 79,975 self-employed had to increase in February of this year.

Several new regulations came into force on Wednesday for the fight against the corona pandemic in autumn and winter.

Among other things, this involves evaluation criteria for the pandemic situation and information on the vaccination status of employees.

They were announced in the Federal Law Gazette on Tuesday.

The main yardstick for assessing the situation should therefore be the number of corona patients in the clinics.

This is intended to replace the previous focus on the number of infections, which is no longer considered as meaningful in view of the vaccinations.

However, »other indicators« should also be taken into account.

The countries should then be able to determine where the critical thresholds lie, from which further everyday restrictions apply.

In addition, employees in daycare centers, schools and nursing homes should be able to be asked by the employer whether they are vaccinated during the crisis.

Association: Mask production in Germany is largely at a standstill

According to the German Mask Association, the German manufacturers of corona protective masks have almost completely stopped their production. "With a few exceptions, all machines are at a standstill," said spokesman Stefan Bergmann the "General-Anzeiger" on Tuesday. He cited the lack of major orders from public buyers and the health sector as the reason for the large supply of cheap masks from China.

"We are dependent on large orders from the health service, municipalities and authorities such as the police," said Bergmann.

The state ministries would have to issue instructions that authorities should not only award contracts based on the price.

If the demand for German masks increases again due to delivery problems of the Chinese manufacturers, operations could be restarted quickly.

"We still have the machines, but in six months that will probably not be the case."