Rangers organize to combat the relentless advance of poachers, squatters and miners Forest guards walk for hours past deep pools of stagnant water dyed black. It is close to noon and the sun filters through the tufts of green leaves on the treetops. Neither says a word; you can only hear their footsteps on the wet leaves and the insistent whistle of a screaming piha and a symphony of insects. Yury Cáceres, the ranger in the lead, makes a hand signal and asks them to stop in their 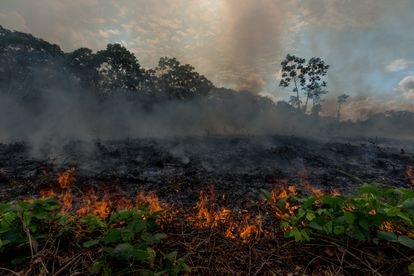 It is close to noon and the sun filters through the tufts of green leaves on the treetops.

Neither says a word;

you can only hear their footsteps on the wet leaves and the insistent whistle of a screaming piha and a symphony of insects.

Yury Cáceres, the ranger in the lead, makes a hand signal and asks them to stop in their tracks.

He scans the lush landscape for signs of poachers: a bucket, a gallon jug, or any sign that they've been there.

They detect no trace of chainsaws, but a few miles further on, the team of three rangers finds a makeshift and apparently abandoned hideout.

The forests of the district of Las Piedras, in the southwestern part of the Amazon basin, bordering Peru with Brazil and Bolivia, are the habitat of thousands of species —among them the harpy eagle, the howler monkey and the jaguar—, but the loggers they are here for other great jungle treasures.

"Now that there is no mahogany or cedar, they come for the shihuahuacos, the giants of the forest and those who give the most money," says Cáceres.

A man armed with a chain saw can fell a thousand-year-old tree in a couple of hours.

After working as an official park ranger in the National Service of Natural Areas Protected by the State (SERNANP) for almost ten years, Yury Cáceres joined a non-governmental organization that aims to create an uninterrupted conservation area throughout the basin. of the Las Piedras river.

With the support of various international organizations, they acquire land concessions from the Peruvian government or current rights holders, and operate them as conservation areas employing local rangers to monitor and ensure that no illegal activity takes place in the area. the forests.

“I got tired of the irregularities I saw in the state system.

When the Navy and the prosecution came, the illegals were generally no longer present.

Among my colleagues there were snitches.

We ever found a cell phone that only contained nicknames.

When we marked it, we found that one of our colleagues was the one who warned the illegals.

This is how it works until today and there is more and more lack of control”, laments Yury.

A scenario that operates within a chain of officials from various Peruvian state entities in tune with large logging companies in a system similar to a mafia, a criminal organization.

Primary forest on fire in the Las Piedras area.Michael Tweddle

And it is that to reach the affected areas in the Las Piedras basin from the city of Puerto Maldonado, you have to take the Interoceanic Highway, deviate 50 kilometers along a winding dirt track to the port of Lucerna or Sabaluyoc and embark on a boat engine for a journey that can last hours.

Then you have to walk in the thick of the jungle, cross pools of stagnant water, between the humidity of the leaves and a thick mud that sucks the legs.

The authorities hardly dare to undertake such a hard journey within the protected concessions —which cover more than 18,000 hectares— including the neighboring concessions of other owners who do not have the resources to continue protecting them.

“If we find any illegal activity, we register it immediately, but we are not allowed to take any action,” says Cáceres.

He explains that to carry out an eviction there is a protocol that involves a passive attitude towards poachers.

Interventions must be done with sanity since some loggers carry shotguns and can react badly.

Several of the forest guards who now protect the Las Piedras forests have been poachers and know the tactics.

They know that the illegals use the indigenous communities as a bridge to enter the protected areas.

Consequently, these are divided between those who support conservation and those who prefer money.

“Our work is not only about protecting the forests of Las Piedras, but about being in contact with the communities and offering them alternatives, empowering women and educating the new generations,” says Cáceres, showing pride in his work as a protector.

But this job is never without risk.

Threats fall like the violent rain that whips through the jungle.

According to the Peruvian Society of Environmental Law (SPDA), 14 environmental defenders have already been murdered since the start of the pandemic;

the last one, Juan Julio Fernández, assassinated with two shots to the head last March.

According to a report published by the environmental rights organization Global Witness, 2020 was the most dangerous year on record for people defending their homes and ecosystems, and almost 30% of the attacks that occurred are related to the exploitation of resources, including logging, mining and large-scale agribusiness.

Even with the best technology, rangers are at a disadvantage;

They generally patrol without carrying any type of weapons and with little support from the institutions in charge of forest management.

According to a report provided by Dina Tsouluhas, director of the Junglekeepers ranger program, since 2019 they have been filing complaints against illegal invaders in a protected concession in the Loreto sector in Las Piedras, without any success.

“It is difficult for prosecutors or police to reach illegally invaded points.

They usually abort the mission before reaching the deforested area.

When they finally do it and they only find burned and degraded areas and there is no evidence of logging of hard species, the authorities claim that this is not a crime, shelving the cases forever”, laments Tsouluhas.

The contrary is stated in Article 310 of the Peruvian Penal Code.

The ranger team flies a drone to observe the invasion zone in the Loreto station, Peru.Michael Tweddle

But the rangers do, sometimes camping in the middle of the jungle, enduring the sticky feel of their own skin and improvising more than one meal.

It's hard to keep up when deforestation is advancing at such a fast pace.

According to the monitoring of the National Forest Program of the Ministry of the Environment, Peru lost 203,000 hectares of forest in 2020. A record number of deforestation, the highest in the last 20 years, according to the Mongabay portal, If Metropolitan Lima were a forest, in just one year 72% of its area would be destroyed.

In Las Piedras, the main causes of deforestation are due to agricultural expansion —especially for the cultivation of papaya, corn and cocoa—, gold mining in some areas and timber extraction on non-timber chestnut concessions.

"Degradation and change of use are being generated within chestnut concessions," says forestry engineer Tatiana Espinosa.

"The chestnut growers are selling the standing trees and making deals with the loggers, creating clandestine highways to remove the trees, mainly shihuahuacos," laments Espinosa.

Yony ​​Guevara, who works as a forest ranger alongside Cáceres, has grown up in a culture of loggers.

“I started working in makeshift sawmills when I was 16 years old.

He had a brother who was part of the Army and began to dedicate himself to wood.

Thanks to him, I made the contact and entered”, says Guevara.

“A year later I was already cutting down trees.

When we worked in free zones, we were willing to do anything, but in private concessions we knew that they could take us out.

Now I am on the other side of the coin, but I see more money and more corruption.”

In a recent patrol in the area of ​​Quebrada Loreto, where roads are already wide enough for the trucks that transport the wood in slats to pass, Cáceres and Guevara found new cocoa and corn fields, burned remains of the forest and a colossal stump of Shihuahuaco mutilated on the waste ground.

The extensive patch of degraded forest was the same one they had been observing months ago in images captured by a drone.

Only this time, they had before their eyes the remains of an immense reddish-brown trunk—contrasted with pronounced veining—revealing the rings formed in its hundreds of years of growth.

An ancient tree, whose solid roots emerge from the ground forming the enormous buttresses, the "fins",

Cáceres took out his camera and recorded the scene of devastation.

“While we arrive in Puerto Maldonado, we show the evidence, we do the paperwork and we convince one of the prosecutors to go to the invaded and destroyed area, it will be too late,” Cáceres lamented.

“And then they will surely tell us that this is not a crime, that it is just one more tree, among the thousands and thousands of trees that rise in the Peruvian Amazon.” 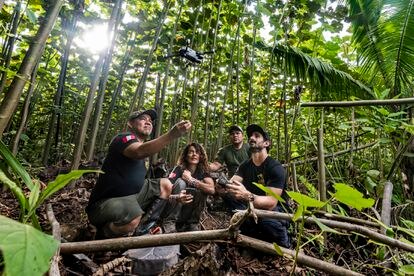 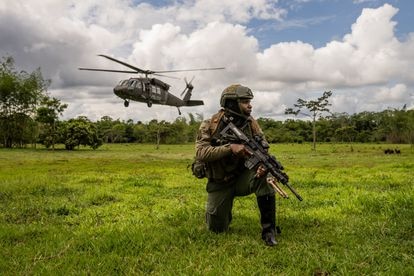 Deforest the Colombian Amazon as a way of life 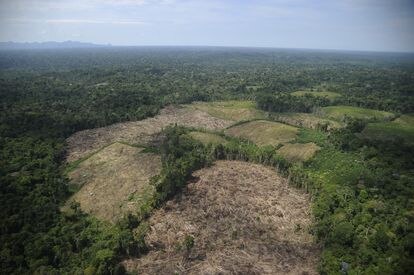 Machetes vs. bulldozers: the battle for Amazon timber 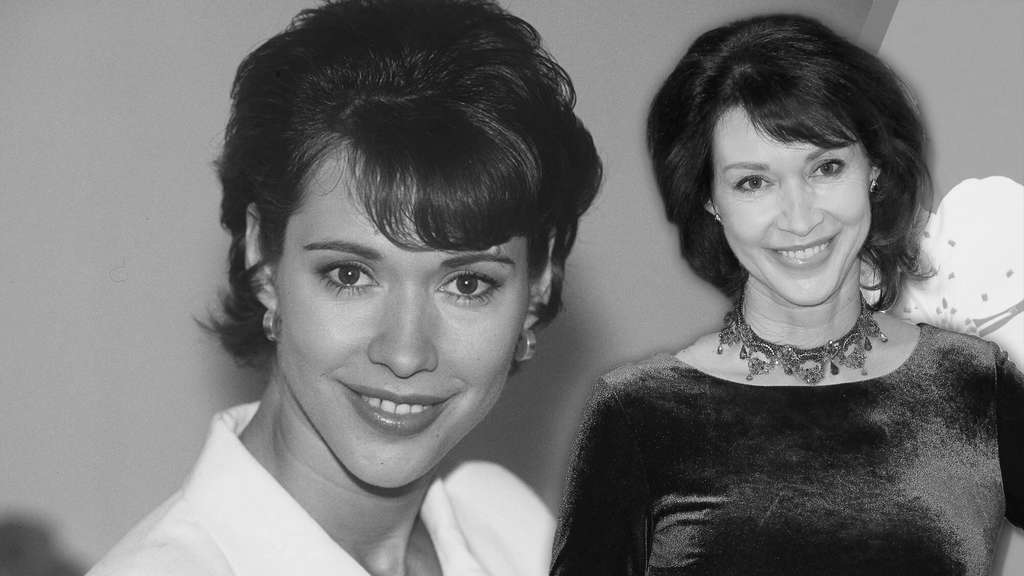 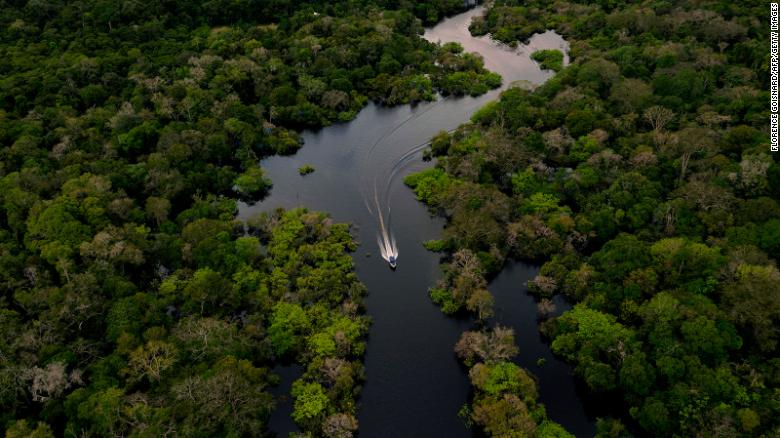 The Amazon rainforest could soon become a savannah 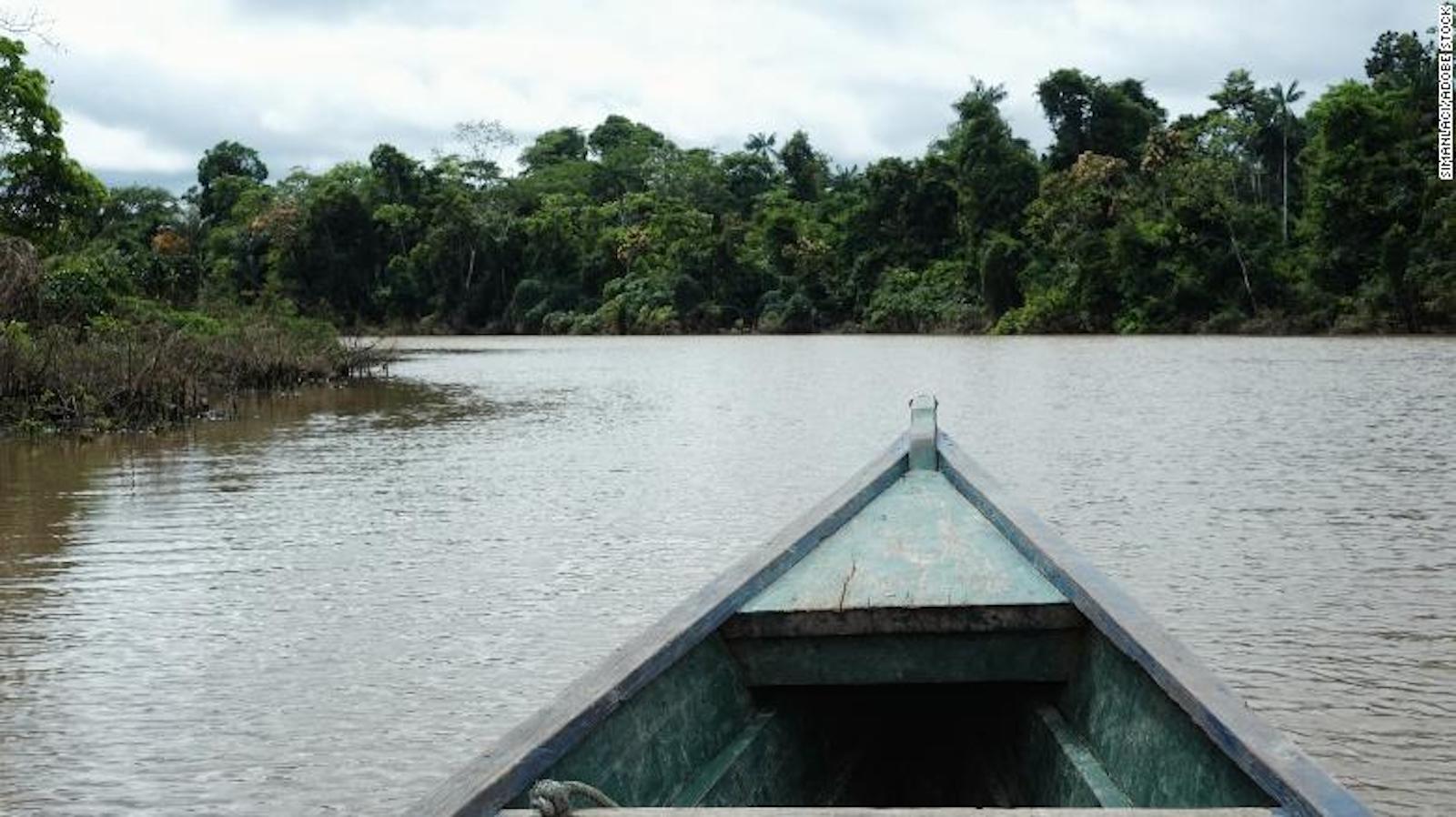 ANALYSIS | Defending the Amazon is a dangerous mission. Critics say Bolsonaro is making it worse 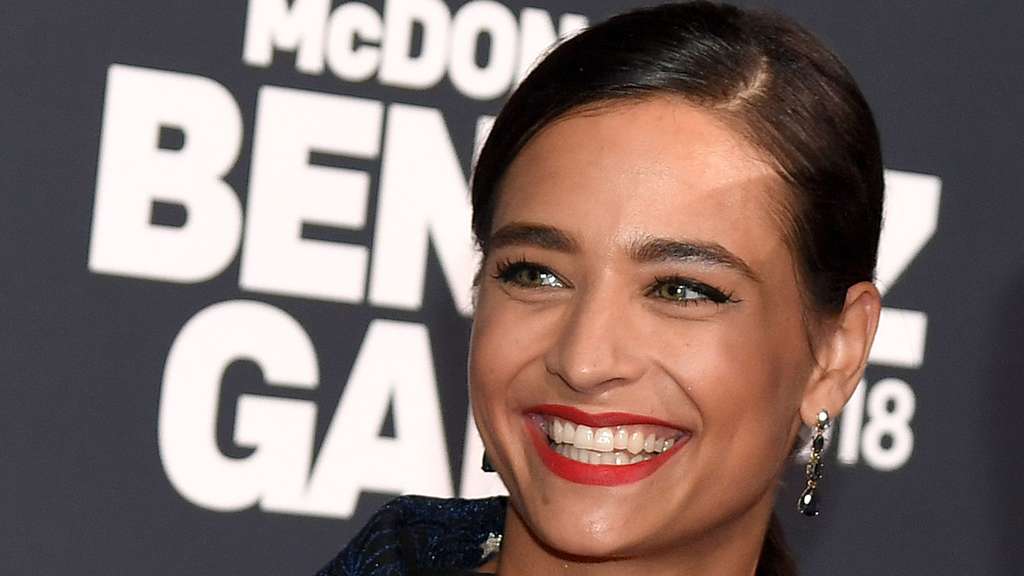 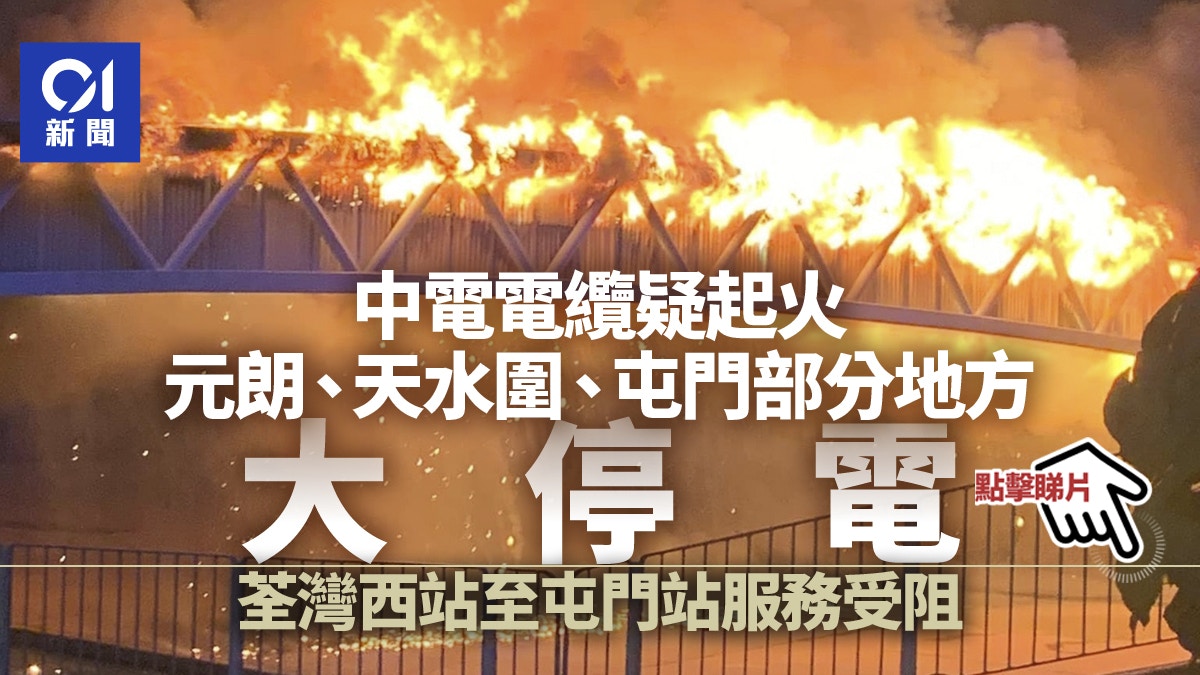