Corona: Great Britain classifies mutant B.1.617 from India as worrying

Great Britain is registering more and more infections with the mutant B.1.617 known from India - even among vaccinated people. What does that mean for Germany? 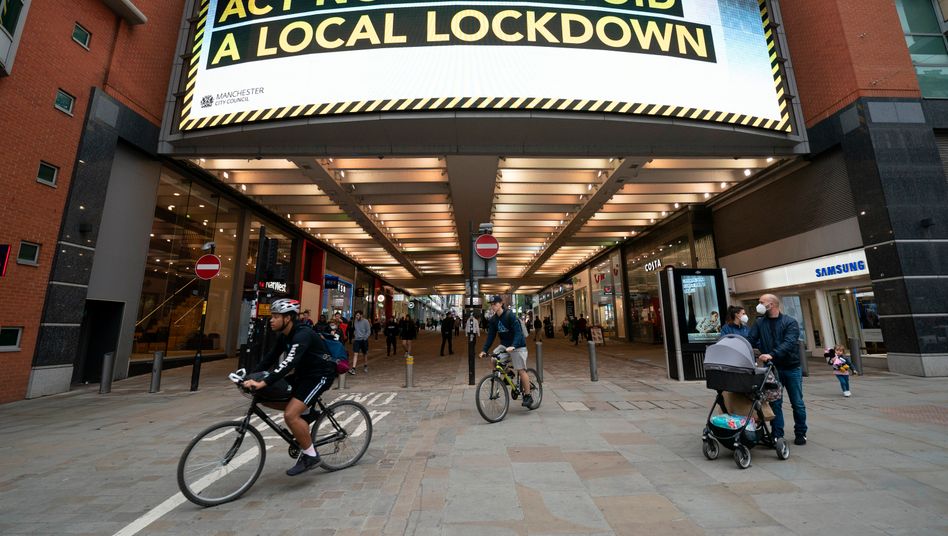 Street in Manchester: The number of infections with the mutant B.1.617 has skyrocketed in Great Britain

Because the corona variant known from India is now also spreading in Great Britain and there are increasing indications of local outbreaks, the British health authority Public Health England (PHE) has now classified it as "worrying". Before that, the mutant was only under observation. British media had already reported unanimously about the move. The decision could also have an impact on the assessment of the situation in Germany.

In Great Britain, a large part of the population has already been vaccinated and the number of infections has dropped significantly.

A development that is now also emerging in Germany.

If new variants should nevertheless lead to a renewed wave of infections in Great Britain, this should soon also be the case in this country.

However, it is still unclear how dangerous the variant with the abbreviation B.1.617 really is.

What makes a variant "worrying"?

Scientists are observing the spread of new virus variants around the world.

Since the pathogen is constantly mutating, there are now countless.

Most researchers are not worried, however.

However, if a mutant spreads much faster than others, it is initially considered a "variant under observation", in English variant of interest, abbreviated to VOI.

Scientists then check whether it is possibly more contagious or whether it can re-infect vaccinated people and genesis.

If the references to it are concentrated, it is upgraded as a »worrying variant«, in international parlance it is referred to as variants of concern, or VOC for short.

As early as Friday morning, the BBC and the Guardian reported, among others, that this step is imminent in the case of B.1.617 in Great Britain.

In the meantime, PHE has confirmed the move.

The variant was first detected in India and had spread quickly.

This suggests that the mutant could be more contagious.

In addition, there is the suspicion that it could possibly undermine the immune response and thereby re-infect vaccinated persons and genesis.

According to media reports, one of three subtypes in particular is now spreading rapidly in Great Britain, B.1.617.2.

More than 500 cases are now known, mainly from London and the north-west of England - a significant increase.

By the middle of last week, only just under 200 infections with the variant had been documented.

It is unclear where those affected were infected.

According to initial findings, the variant has not only been proven in travelers from India or their contact persons.

This suggests that the mutant is now also spreading locally.

According to internal documents from the British health authority PHE, 15 people who had already been vaccinated twice with the AstraZeneca vaccine had also been infected in a London nursing home.

However, this does not have to mean that the vaccine does not work against the variant.

Those affected had only received the second dose a few days before the outbreak.

From this point on, full protection cannot be assumed.

In addition, the vaccine could have prevented severe courses.

Although four of those affected had to be treated in hospital, they were not seriously ill with Covid-19.

It is therefore also known as a »double mutant«, but has significantly more genetic changes.

Researchers cannot yet say exactly what exactly these mutations cause.

However, the variant is possibly more dangerous than the original type of the virus in two ways:

How dangerous B.1.617 actually is cannot, however, be estimated with any certainty at the moment.

Researchers are particularly alarmed by the dramatic situation in India.

The health system is overloaded in many places.

India's chief virologist Shahid Jameel believes it is possible that up to 900,000 new infections could be reported per day.

B.1.617 alone cannot explain the situation in India

However, it is difficult to estimate what proportion the new variant B.1.617 will have in the considerable increase.

There is no extensive sequencing in India.

One thing is clear, however: other variants continue to circulate.

From January onwards, the more contagious variant B.1.1.7 had spread in India, which had first been detected in Great Britain.

According to virologist Jameel, people in India should be less worried about mutations anyway, but better protect themselves from the virus and consistently wear a mask.

The government finally needs to prevent mass events, which are likely to have contributed to the significant spread of the virus.

In Germany, variant B.1.617 is hardly represented so far, only about 64 cases are known.

Because it is not clear whether the mutant is actually more contagious and increasingly leads to reinfections, according to the Robert Koch Institute (RKI) there is currently a lack of “reliable knowledge” to classify this variant as “worrying”.

For the time being, it is therefore still regarded as a "variant under observation".

In this country, variant B.1.1.7 still clearly dominates, which, according to the current report by the RKI, accounts for 91 percent of infections in Germany and which has also led to a significant increase in the number of infections in other countries.

How long the world will struggle with the pandemic also depends on whether the virus finds a way to escape immune protection. Especially in countries where vaccination campaigns are picking up speed, but the number of infections is still high, the chance of such escape mutations increases, warn researchers. Corona restrictions, more vaccinations worldwide and consistent testing, tracking and isolation of suspected cases - especially when traveling abroad - are therefore the best way to prevent mutations.

Corona: Great Britain classifies mutant B.1.617 from India as worrying Indian corona mutant: RKI warns of spread in Germany - what we know so far about variant B.1.617

Coronavirus: mutants on the rise